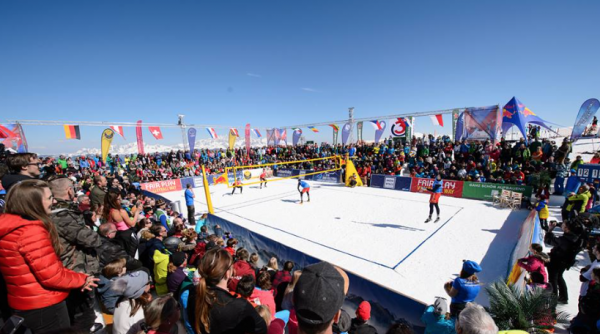 Eurosport 2 broadcast the gold medal matches on Sunday night and did so again on Monday morning – with much attention towards the #EuroSnowVolley resulting also from the spots promoting the championship and aired on Eurosport 2 from March 22 to 26, 2018. The TV spots alone generated more than five million contacts, thus reaching 2.9 million unique viewers, a truly remarkable audience for Snow Volleyball and for the first-ever continental championship.

On Sunday afternoon, as Eurosport 2 broadcast one of their promotional spots during live transmission of a snooker competition, Europe’s number one sports destination reached as many as 495,000 impacts all at once.
On top of this, an extra-European audience could witness the actions from the Austrian Alps as well, since Eurosport Asia-Pacific broadcast the gold medal matches on March 26.

The figures are extremely rewarding for the FIVB and CEV as well as for the organisers of the historic Snow Volleyball party held in Wagrain-Kleinarl and they show that there is significant appetite for this young, fresh and truly energetic sport. With this in mind, the FIVB and CEV would like to thank Eurosport for the good cooperation and their readiness to showcase Snow Volleyball to such a large audience, thus spreading the word about this sport to an unprecedented number of households across the whole of Europe and beyond.